Deprecated: mysql_connect(): The mysql extension is deprecated and will be removed in the future: use mysqli or PDO instead in /home/hardbdsm/domains/hardbdsm.net/public_html/scj/includes/db_modules/mysql.php on line 11
 HardTied video gallery "Tell Me What To Do"

Tell Me What To Do 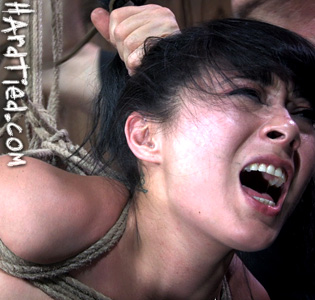 Short description: Colette Rouge and Elise Graves met at a party. Elise saw her playing in her lingerie and immediately knew that she had to have her. It's easy to see why. Colette has nice tits, with the kind of perky little nipples that stand out ready to be clamped. She has a round ass that is firm so you know that it's going to show the marks when you start in with the kind of corporal punishment that Elise loves to inflict. And most importantly, the way Colette moves sends a very clear message, that she is strong, flexible, and knows how to handle strenuous rope bondage.

Elise works with the perfect mixture of rough handling and tenderness. She pulls Colette in and uses the rope to pose her how she wants, binds her there tightly, then gently caresses her body, feeling the way that the different positions change the curves of her body. When Elise gives Colette's hair a tug her eyes roll back into her head like it is pure bliss.